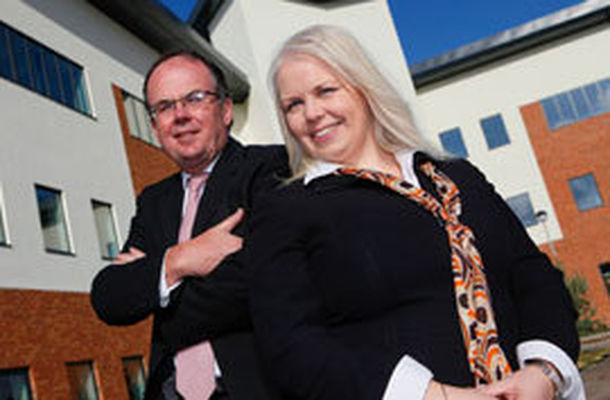 Developer Broadlands Wolverhampton Limited has announced the completion of 24,000 sq ft of Grade A office space at Exchange Court, the latest phase of Wolverhampton Business Park located at Junction 2 of the M54.

With Bromford Group, the leading provider and developer of affordable housing throughout Central England, already lined up to take the Building following a pre-sale deal in June 2008, the delivery of the £80 million 30 acre Business Park is continuing apace.

Bromford Group, which operates in 58 local authorities, has had a presence at the Park for five years and already occupies 15,000 sq ft of office space in the first phase of the development, Venture Court.

The newly completed space at Exchange Court will see Bromford relocating from their current offices at Shaw Park Business Village in nearby Bushbury. It is expected that the company will take full occupancy by the end of the summer.

Work to the interior fit-out of Bromford's sustainable three-storey office building, which has achieved a BREEAM 'very good' rating, is now taking place. Exchange Court is situated next to existing high profile occupiers HSBC, The Royal Bank of Scotland and the Department for Communities & Local Government, something that attracted Bromford to consolidate their head quarters at the Park.

Ralph Jones, of developer Broadlands Wolverhampton Ltd, believes the completion further bolsters the Park's position as a driving force behind the regeneration of Wolverhampton.

He said: "Exchange Court is the fifth phase of offices to be developed at the Park. The deal with Bromford Group reinforces the Park's appeal as an attractive location for environmentally responsible, high specification and professional office accommodation in the region, and we hope will spark further interest from other companies looking for these types of benefits in an accessible location."

Tracy Cadwallader, facilities manager at Bromford Group, said: "The planning for a brand new building has created much anticipation and interest among colleagues, so it's great that we can now see it complete and begin the process of moving. Building upon our existing presence at the Park was an ideal opportunity to bring together our Group Services Teams in one location."

Bromford's continued commitment to the Park says much for the commercial strength of the area, but also underlines the quality of the facilities and amenities on offer here.

"We are already looking ahead to the next phase of development and have detailed planning consent for a second 24,000 sq ft building, which could be delivered on a fast track basis should a potential occupier wish to join a growing number of successful businesses on the Park."

The Park is located adjacent to Junction 2 of the M54, on the A449 Stafford Road and is close to the new M6 toll road. Larger occupiers can be readily accommodated with specific packages tailored to suit individual requirements on a design and build basis.