Topping out of latest building at Wolverhampton Business Park 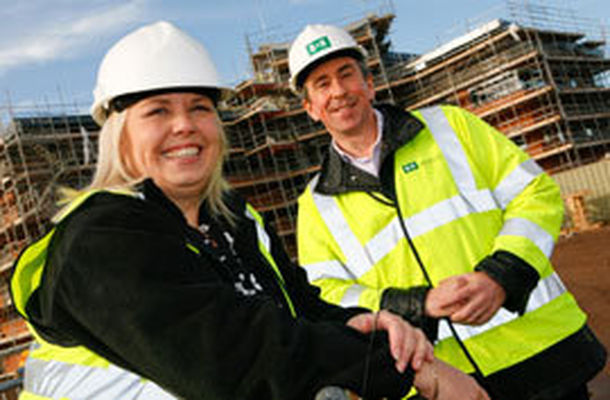 Wolverhampton Business Park has reached another major milestone with the topping out of its newest phase of office development, Exchange Court.

The topping out marks the latest stage in Broadlands Wolverhampton Limited's delivery of the £80 million Park, a 30-acre Greenfield site located at Junction 2 of the M54.

Work began on the 48,000 sq ft development earlier this summer, after Bromford Group - the leading provider and developer of affordable housing throughout Central England - signed a pre-sale deal on a freehold basis.

The Grade A office building is situated in good company, next to existing high profile occupiers HSBC, The Royal Bank of Scotland and the Department for Communities & Local Government, which have already helped to enhance Wolverhampton's reputation as a top quality business destination.

Ralph Jones, of developer Broadlands Wolverhampton Ltd, believes the topping out milestone further bolsters the Park's position as a driving force behind the regeneration of Wolverhampton.

He said: "The deal with Bromford signified the Park's continued popularity among good quality occupiers who are looking for environmentally responsible, high specification and professional office accommodation in the region. Exchange Court is the fifth phase of offices to be developed at Wolverhampton Business Park and, with the topping out ceremony showing the visible construction progress, we expect this to spark even more occupier interest."

Bromford Group, which owns 25,000 homes and operates in 58 local authorities, has had a presence at the Park for nearly five years, already occupying 15,000 sq ft of office space in the first phase of the development, Venture Court. The additional space at Exchange Court will see Bromford consolidating its regional offices, involving relocating from Shaw Park Business Village in nearby Bushbury.

Work to the interior of Bromford's sustainable three-storey office building, which is set to achieve BREEAM 'very good' rating, will now begin, with the company taking occupancy following completion in Spring 2009.

Tracy Cadwallader, facilities manager at Bromford Group, said: "The visible progress of the construction on site has created much anticipation and interest among the team that will consolidate in 2009. The chance to build upon our existing presence at the Park was an ideal opportunity, not only for the existing team but also our customers who will benefit from the combined excellent customer service."

Jonathan Rogers, of developer Broadlands Wolverhampton Ltd, added: "Bromford's decision to unite its operation at the Business Park is not only testament to the commercial strength of the area, but also to the quality of the facilities and amenities on offer here.

"Despite the current climate, we continue to see a high level of interest in the opportunities available at the Park, from both local and regional occupiers looking to expand, which is reflected by the continuing development on site."

The Park is located adjacent to Junction 2 of the M54, on the A449 Stafford Road and is close to the new M6 toll road. Larger occupiers can be readily accommodated with specific packages tailored to suit individual requirements on a design and build basis.